The A-series was quite the formidable mid-range series, probably the most successful series from Samsung in a long time, other than the S-series. Among them is the Samsung Galaxy A21S. Launched in May 2020, the Samsung Galaxy A21S specifications include a nice 6.5-inch screen, a quad camera, and fast charging. The expected price of a21s in Kenya is Ksh 21,000.

Samsung Galaxy A21S comes with a 6.5 inch IPS LCD capacitive screen, with an Infinity O punch out design to accommodate the front-facing camera. The nearly bezel-less 720p screen has a screen to body ratio of 82.8% and a PPI density of 270. It has a hardened plastic frame to the back.

Outback, it has a quad set up camera system aligned to the top left, and squarely at the back of the back is the fingerprint scanner. It has a downward-firing speaker at the bottom, next to a USB-C connector and the elusive 3.5 mm headphone jack. You may like Samsung Galaxy A30s.

The Samsung Galaxy A21S comes with Samsung’s in-house Exynos 850 chipset, paired with an octa-core 2.0 GHz Cortex A55 CPU and a Mali G52 GPU. The memory configuration in 3/4/6 GB for RAM and 32/64 GB for ROM, with a dedicated micro SDXC card slot, capable of expanding the memory by an extra 1T. This is a lot of decent power, capable of mid-range performance. There is hardly any task one can through at such an SoC set up and get disappointed, even if it’s a graphics-intensive gaming experience.

Now Samsung Galaxy A21S comes with the quad-camera set up, flagged off by the 48 mp wide-angle primary camera, supported by an 8 mp ultra-wide lens, a 2 mp macro, and 2 mp depth sensor. The photos are great, sharp, and very well detailed. The depth sensor works wonders with the bokeh, creating great and believable distance variance. 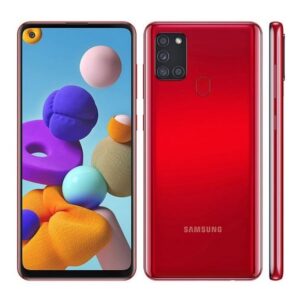 The edge detection is great in portrait mode, creating a very believable blurry background. It can shoot Full HD video at up to 30fps. The front-facing selfie camera is a formidable 13 mp wide lens. The selfies are well detailed, clear, and rich in color. It supports HDR and can shoot 1080p video at 30fps. You may also like Samsung Galaxy A21.

The Samsung Galaxy A21S comes with a standard 4000mAh non-removable Li-Po battery can easily last the whole day, even with a power user. On top of all that, there is 15W wireless charging to fill up this massive battery in a little over an hour, so there’s pretty much no scenario that this phone is running out of juice. That makes it a great budget device for media consumption and general extended use.

The Samsung Galaxy A21S comes with Android 10.0 with One UI 2 on top straight out of the box. The new One UI 2 is a big improvement from the versions of yesteryear. It has been redesigned and optimized, making it lighter, faster, and more interactive. It has less bloatware, feeling less invasive but the extra apps integrated into the UI are most productive, making the experience even more enjoyable, even recommendable.

All said and done, the Samsung Galaxy A21S is a well-balanced value proposition. With a decent battery, a quad-camera set up and the well-optimized chipset balances out the various budget components into quite an attractive device, especially in this particular price segment. Overall, it is a mix of little good things to make a decent budget device.

Be the first to review “Samsung Galaxy A21s” Cancel reply