It was in 2019, September 21 that the Apple iPad 7th Gen was released. This tablet has 250.6 x 174.1 x 7.5 mm dimensions and weighs an average of 487 grams. It is also a Nano–SIM, eSIM tablet that supports GSM / CDMA / HSPA / EVDO / LTE network technologies. On the front is a bezel with a camera punch wherein the selfie camera lie. Its back panel has its camera on the right-hand side. As for the fingerprint scanner, it is front mounted, Touch ID.

Apple iPad 7th Gen comes in colors Silver, Gold, and Space Gray. It makes use of the 2.0, proprietary reversible connector (magnetic connector), and has a 3.5 mm jack. The tablet also has Bluetooth version 4.2, A2DP, LE, GPS with A-GPS, GLONASS, GALILEO, BDS, and Siri natural language commands and dictation. It also supports Wi-Fi 802.11 a/b/g/n/ac/6, dual-band, Wi-Fi Direct, hotspot. As for radio (FM/AM), the same does not support it – see Apple iPad 9.7

The Apple iPad 7th Gen tablet supports four network technologies. These are GSM, HSPA, and LTE. HSPA extends and improves the performance of existing 3G mobile telecommunication networks using the WCDMA protocols. LTE  is a standard for wireless broadband communication for mobile devices and data terminals, based on the GSM/EDGE and UMTS/HSPA technologies. You may also like Galaxy Z Fold 2 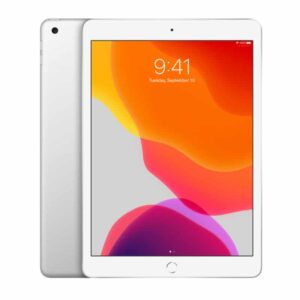 Now, let us take a look at the display this tablet has to offer. We all love a good display on a tablet for obvious reasons. Namely, the display is the one part of a phone you will ever interact with. Apple iPad 7th Gen has a large display panel that measures 10.2 inches, 324.6 cm2. It is an IPS LCD capacitive touchscreen that supports 16M colors and multi-touch. This display has a high 1620 x 2160 pixels resolution and an equally high 264 PPI density. The same is protected by Scratch–resistant glass, oleophobic coating.

A phone platform is the hardware/software environment for tablets, smartphones, and other portable devices. Apple iPad 7th Gen runs on the iPadOS 13.1, upgradable to iPadOS 13.6.1 operating system. iPadOS is a mobile operating system created and developed by Apple Inc. for its iPad line of tablet computers. The successor of iOS 12 on iPad. The large iPad display takes advantage of the redesigned home screen. A refined layout lets you see more apps and you can pin useful widgets on the front page.

Moreover, the Apple iPad 7th Gen 10.2 inch is a Quad-core 2.34 GHz (2x Hurricane + 2x Zephyr), Apple A10 Fusion (16 nm) chipset. Under the hood, it also brings a PowerVR Series7XT Plus (six-core graphics) GPU. The PowerVR Series7XT family provides an important feature upgrade over Series6XT, bringing new levels of performance to apps, games, and GPU compute applications – source. This is not all. The Apple iPad 7th Gen comes with 128 / 32 GB of internal storage coupled with 3GB of RAM.

There are only two cameras on the Apple iPad 7th Gen. They are made up of a main 8 MP, f/2.4, 31mm (standard), 1.12µm, AF. This is the camera you see on the back panel of this phone. Video recording with the main camera is up to [email protected] (HDR, stereo sound rec). Its selfie camera on the other hand is a 1.2 MP, f/2.2, 31mm (standard) lens. Its main features include Face detection, HDR, panorama. It can shoot video up to [email protected]

Apple iPad 7th Gen has a large non-removable Li-Po 8827 mAh battery. It is a lasting battery given its 8827 mAh capacity. This battery capacity should be enough to last a whole day of mixed usage – see also Galaxy S20 Ultra. Inside the box of this tablet, you will find a and iPad, a Lightning to USB Cable, and a USB Power Adapter.