The price of Xiaomi Redmi 8A in Kenya is 11,500 shillings. It was announced in 2019, September 25, and it comes after the Redmi 9a. Xiaomi Redmi 8AAndroid Smartphone runs on the Qualcomm SDM439 Snapdragon 439 processor with Adreno 505 GPU. The phone has 3 GB RAM and 32 GB of internal storage which is expandable using micro SDXC (dedicated slot). It also runs on Android 10 and is powered by a 5,000 mAh battery.

Traditionally, the Redmi XA series has been a staple for some of the lowest-priced smartphones that Xiaomi retails. This time around, they truly did not disappoint. They concentrated on what is important to a low-budget user and the result was the Xiaomi Redmi 8A. Let’s get a closer look.

Straight of the box, we are greeted by the 6.22inch IPS LCD capacitive screen, with the teardrop camera housing design, helping achieve a screen to body ratio of 81.8%. the front glass is Corning Gorilla Glass 5 protected and achieves a decent 400 nits of brightness. The rest of the frame and back is plastic, which helps lower the price even further. 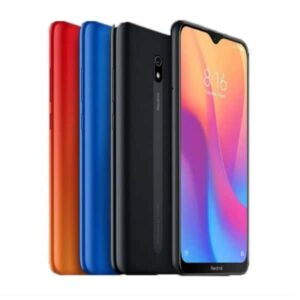 At the middle of the back is a single primary camera but sadly no fingerprint scanner. Other than a small chin at the bottom with the Redmi lettering, the bezels in the Xiaomi Redmi 8A are not all that conspicuous. It weighs in at 188g and is 9.4mm thick, largely influenced by the bigger battery. Visit this product’s official website to learn more.

As expected, the Xiaomi Redmi 8A budget phone comes with a budget SoC. The chip on board is the Snapdragon 439 paired with the Cortex A53 CPU which revs up to 1.95GHz and an Adreno 505 GPU. The memory options are  2GB RAM and 32 ROM  Since it’s a budget phone, this is not exactly an award-winning processor.

But even in its modest setting, the phone throws a hefty punch in the average day to day use but would totally struggle in intensive tasks such as gaming. It gladly has a dedicated microSD card slot to enable you to expand memory up to 256GB. You may also want to see Xiaomi Redmi 9

The Xiaomi Redmi 8A comes with a mono camera system, boasting a modest 12mp dual pixel wide lens with an LED flash module squeezed next to it. It might not win any awards but can at least shoot 1080p video in 30fps. The photos are decent and passable but get grainy in low light and very noisy when overexposed. The camera supports HDR and panorama on top of the ordinarily offered modes. The front-facing shooter is a basic 8mp lens, HDR supported, shooting 1080p video at 30fps. The photos are fairly decent and usable.

To make up for everything else the Xiaomi Redmi 8A loses is a massive 5,000 mAh non-removable Li-Po battery. This more than enough to last more than one day, even for the power user. Although it comes with 10W charging brick and USB-C cable, the device can support up to 18W fast charging, which is great. Charging this phone to 100% should take about 2.5 hours, considering it’s fairly big.

The Xiaomi Redmi 8A comes out of the box with Android 9.0 with the MIUI 11 custom skin on top. It goes on to offer a great and smooth experience, despite the modest SoC. It shouldn’t show a visible lag in normal use and is still up for updates and the various security patches.

Everything taken into consideration, the Xiaomi Redmi 8A is truly a king among budget phones. The sleek look, the bezel-less screen, and a Snapdragon SoC make it an easy choice for someone looking for a cheap but practical phone. However, unlike most of the other Xiaomi devices, the Xiaomi Redmi 8A doesn’t have an IR blaster. It comes in Midnight Black, Ocean Blue, and Sunset Red

Be the first to review “Xiaomi Redmi 8A” Cancel reply