How much is the Tecno Pop 3 Plus in Kenya? The price of Tecno Pop 3 Plus in Kenya is 9,700 shillings. Pop 3 Plus Android Smartphone runs on the Mediatek MT6761 Helio A22 (12 nm) processor with PowerVR GE8320 GPU. The phone has 1 GB RAM and 16GB of internal storage which is expandable using micro SDXC (dedicated slot). It also runs on Android 9.0 (Pie) and is powered by a 4,000 mAh battery.

Tecno Pop 3 Plus specs and price in Kenya

The Tecno Pop 3 Plus measures 166.7 x 75.8 x 8.4 mm (height x width x thickness) with a total weight of 181 grams. Coming to cameras, it has a single 8MP rear camera and a single 8 MP front camera for selfies. This phone has a 6.52 inches, 720 x 1600 pixels IPS LCD display with a pixel density of 269 PPI. It has a micro USB 2.0 port for data syncing and charging. There is a fingerprint sensor present on the Pop 3 Plus smartphone. It is a dual SIM smartphone with support for Wi-Fi, and GPS too. Buy it today at PhonesStore Kenya.

This phone, the Pop 3 Plus was released in 2020, 2019, December. This phone has a 166.7 x 75.8 x 8.4 mm dimension and weighs about 181 grams. It is also a Dual SIM smartphone that uses Nano-SIM and has a dual standby. On the front is a dewdrop display wherein the selfie camera lies. Its back panel has a single-camera module on the right-hand side. As for the fingerprint scanner, there is rear-mounted just beside the camera module.

Tecno Pop 3 Plus comes in the colors Midnight Black, Vacation Blue, and Hillier Purple. It makes use of the micro USB 2.0 and has a 3.5 mm jack. The phone also has Bluetooth version 4.2, A2DP, LE, and GPS with A-GPS. It also supports Wi-Fi 802.11 b/g/n, hotspot. Visit this product’s official website by following the highlighted link.

The Tecno Pop 3 Plus smartphone supports four network technologies. These are GSM, HSPA, and LTE. HSPA extends and improves the performance of existing 3G mobile telecommunication networks using the WCDMA protocols. LTE  is a standard for wireless broadband communication for mobile devices and data terminals, based on the GSM/EDGE and UMTS/HSPA technologies. 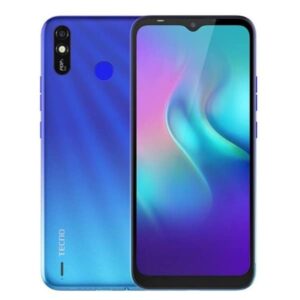 Global System for Mobile Communications is a standard developed by the European Telecommunications Standards Institute to describe the protocols for second-generation digital cellular networks used by mobile devices such as mobile phones and tablets – see Tecno Pop 3 smartphone as well.

A phone platform is the hardware/software environment for tablets, smartphones, and other portable devices. Tecno Pop 3 Plus runs on the Android 9 operating system. Android Pie is the ninth major release and the 16th version of the Android mobile operating system. It was first released as a developer preview on March 7, 2018, and was released publicly on August 6, 2018. As of September 2020, 26.06% of Android devices run Pie, making it the second-most used version of Android. This version of Android it runs is based on HIOS 5.5.

Under the hood, it also brings a PowerVR GE8320 GPU. The PowerVR GE8320 by Imagination Technologies is an integrated graphics card for mid-range ARM SoCs. It belongs to the Series8XE series of GPUs (GE8xx0) and supports OpenGL ES 3.2, OpenCL 1.2, Android NN HAL API, and Vulkan 1.0. Tecno Pop 3 Plus comes with 16 GB of internal storage with 1 GB of RAM.

There are two cameras on the Tecno Pop 3 Plus. They are made up of a main 8 MP, AF, and an 8 MP, f/2.0 selfie shooter. The main feature here is a LED flash, HDR and it can shoot video up to [email protected] with the main camera, and [email protected] also with the selfie.

Tecno Pop 3 Plus has a respectable Li-Po 4,000 mAh, non-removable battery. It is a lasting battery given its 4,000 mAh capacity – see also Tecno Pop 2 smartphone as well.

Be the first to review “Tecno Pop 3 Plus” Cancel reply