How much is the Samsung Galaxy M62 in Kenya? The price of the Samsung Galaxy M62 in Kenya is 51500 shillings. This Android smartphone runs on the Exynos 9825 (7 nm) processor with Mali-G76 MP12 GPU. The phone has 8 GB RAM and 128/256 GB of internal storage which is expandable using micro SDXC (dedicated slot). It also runs on Android 11 and is powered by a 7000 mAh battery.

The Samsung Galaxy M62 measures 163.9 x 76.3 x 9.5 mm (height x width x thickness) with a total weight of 218 grams. Coming to cameras, it has a quad 64 MP rear camera and a single 32 MP front camera for selfies. This phone has a 6.7 inches, 1080 x 2400 pixels Super AMOLED display with a pixel density of 393 PPI. It has a USB Type-C port for data syncing and charging. There is a fingerprint sensor present on the Galaxy M62 smartphone. It is a dual SIM smartphone with support for Wi-Fi, and GPS too.

This phone, the Samsung Galaxy M62 was released 2021, March 03. This phone has a 163.9 x 76.3 x 9.5 mm dimension and weighs about 218 grams. It is also a Dual SIM smartphone that uses Nano-SIM and has a dual standby. On the front is a hole punch display wherein the selfie camera lies. Its back panel has a quad-camera module on the right-hand side. As for the fingerprint scanner, there is a side-mounted one.

The Samsung Galaxy M62 smartphone supports four network technologies. These are GSM, HSPA, and LTE. HSPA extends and improves the performance of existing 3G mobile telecommunication networks using the WCDMA protocols. LTE  is a standard for wireless broadband communication for mobile devices and data terminals, based on the GSM/EDGE and UMTS/HSPA technologies. 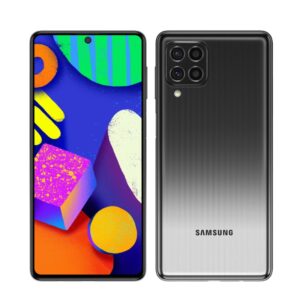 Global System for Mobile Communications is a standard developed by the European Telecommunications Standards Institute to describe the protocols for second-generation digital cellular networks used by mobile devices such as mobile phones and tablets – see Galaxy M51 smartphone as well.

A phone platform is the hardware/software environment for tablets, smartphones, and other portable devices. Samsung Galaxy M62 runs on the Android 11 operating system. Android 11 is the eleventh major release and 18th version of Android, the mobile operating system developed by the Open Handset Alliance led by Google. Also powering the Galaxy M62 is an Octa-core (2×2.2 GHz Cortex-A75 & 6×2.0 GHz Cortex-A55) chipset. This version of Android it runs is based on One UI 3.1.

Under the hood, it also brings a Mali-G76 MP12 GPU. The ARM Mali-G76 MP12 is an integrated high-end graphics card for ARM-based SoCs (mostly Android-based). It was introduced in early 2019 in the Samsung Exynos 9820 (e.g. Galaxy S10 Plus). It integrates 12 of the 20 possible cores and is based on the second generation of the Bifrost architecture. . Samsung Galaxy M62 comes with 128/256 GB of internal storage with 8 GB of RAM.

Let us also take a look at the display this phone has to offer. Everyone loves a good display on a phone for obvious reasons. Namely, the display is the one part of a phone you will ever interact with. Samsung Galaxy M62 has an impressive Super AMOLED display panel that measures 6.7 inches, 108.4 cm2. This display has a decent 1080 x 2400  pixels resolution and an equally high 393 PPI density. As for the selfie camera, it is inside that hole punch on the top center. Here you will also get 420 nits (peak) and an 86.7% screen-to-body ratio.

Samsung Galaxy M62 has a respectable Li-Po 7000 mAh, non-removable battery. It obviously is a lasting battery given its 7000 mAh capacity – see Mi 10T Pro 5G smartphone as well. This one supports fast charging 25W as well as reverse charging.

Be the first to review “Samsung Galaxy M62” Cancel reply