Rated 2.00 out of 5 based on 1 customer rating
(1 customer review)
Availability:

The price of the Nokia C1 in Kenya is 7,200 shillings. It comes with a 2500 mAh battery, 16 GB of internal storage, and a relatively small 5.45  inches display. It also has a single 5 MP camera and 1 GB of RAM. The C1 by Nokia comes in colors Black and Red. It is the predecessor of Nokia C2. Find more about this phone on the official product website.

Way before the smartphone revolution, Nokia used to be the king of the basic nut sturdy phone. The performance would have been basic, but the quality inarguably better than the competition. That rings true to its new Nokia C1. This is as basic as smartphone design goes in a phone but still delivers average smartphone functionality. Here is a deeper look at it – see also Nokia C2.

The Nokia C1 design looks basic from the jump. A 5.45 inch TFT LCD screen with significantly big bezels and a chin, a small front-facing camera and that’s pretty much it. It is of course a plastic build and it houses a single-lens camera at the back. Of course, we don’t expect a fingerprint scanner so pattern and pin should work just as fine. It has a bottom-firing speaker, a micro-USB connector, and a headphone jack. 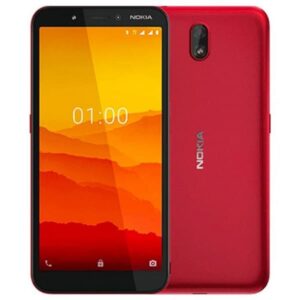 On the bottom chin, we get the older 3-part capacitive touch keys that are reminiscent to the days before screen gestures. The phone might be cheap but still feels sturdy.

The Nokia C1 comes with the basic entry-level quad-core 1.3 GHz Cortex A53 CPU. The storage is a paltry 1GB for RAM and 16 GB for internal storage. It also has a dedicated micro SD slot that can expand memory onboard by an extra 64 GB. Truth be told, the Nokia C1 runs on very basic performance and anything past basic graphics use is bound to push it past its intended limits. It is terrible even in basic games so not much should be expected from it. It is a basic phone for basic use, nothing more – see Nokia 1 Plus.

The Nokia C1 isn’t designed to have a usable camera, but it gets one anyway. On the back, it has a small 5 mp camera that doesn’t offer much practical use. It’s a little grainy and badly exposed, so the photos are not very usable. It might come in handy every so often but you wouldn’t want to post that content on your social media, trust me.

On the front is another 5 mp sensor and needless to say, it doesn’t do much either. The images are blurry, the shutter speed is slow and the quality low. You might get 720p at 30fps quality video between the two cameras if you can hold the phone steady enough, but that’s pretty much it – see Nokia 5310.

The Nokia C1 comes with an average 2500 mAh non-removable Li-Po battery that’s not bad at all. Considering the internals quite literally use as little power as possible, it is capable to last the whole day, or even two, considering it is not much you can do on this phone anyways. We get standard 10W charging with about a little over 1 hour to finish off charging.

Putting the performance parameters into consideration, these kinds of devices can’t run on regular Android. That’s why a stripped-down basic form of Android is in use here. We have the Android Go Edition, based on Android 9 Pie. It works, at least, but with very basic graphics. It gets the job done gladly so that’s sufficient in my opinion. After all, you get what you pay for, and this is as cheap as it gets.

The Nokia C1 is not a bad device for its offering price. It could work as a temporary device as anything past basic communication should be considered straining it. For a large part though, it should suffice for basic mobile telephony and then some. So enjoy it while it lasts – see Nokia 2.2.

Get the latest Nokia phones in Kenya