Widely known for its wide range of smartphones, Huawei decided to join the foray dominated by cheap manufacturers by introducing a cheap series of their own, featuring a cheap screen, average chipsets, basic cameras, and a relative battery. That description rings true as to what their Y series has been trying to achieve all along. Welcome the Huawei Y5, released in April 2019. Here is the breakdown – see Nokia 2.3

The Huawei Y5 sports a 5.71 inch IPS LCD screen with the modern-looking infinity u teardrop notch that houses the front-facing camera, with a screen to body ratio of 78.1%. the screen has some visible bezels and a very conspicuous chin at the chin labeled with the Huawei logo. The build is predictably plastic, both frame and back, where a single primary camera module lies. 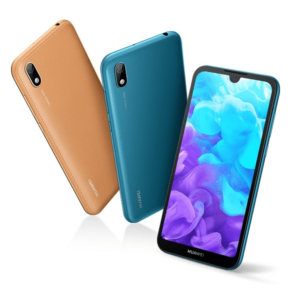 It does not have a fingerprint sensor, but at this price point, that would be expecting too much. At the bottom lies the micro-USB connector and a 3.5 mm jack, features that seem to follow each other in budget phones.

Being an entry device, there is really not much power to be expected here. The Huawei Y5 comes with a Mediatek MT6761 Helio A22 chipset, a quadcore 2,0 GHz Cortex A53 CPU, and a PowerVR 8320 GPU. This absolutely basic performance, for basic apps with basic expectations. Graphics should be poor but everything else should work just fine. It totally works for media consumption, GSM internet up to 4G, and average camera use. Gaming would depend on the graphics needed on the various games but I wouldn’t lean too much onto that particular spec.

On the camera side, I wouldn’t be lying to say that it is as basic as it gets. The primary camera is a 13mp wide shooter that does pretty much all the work. The picture quality is therefore extremely basic, though usable, but only in optimal conditions. Outside those particular parameters, it deteriorates into basic image architecture but without usable clarity. But at this price point, that’s hardly unexpected. It can however still shoot some HD video in 1080p in 30fps, a welcome reprieve to such a basic setup. The front-facing camera is 5mp and not much should be expected, either on video or photos.

At this particular price point, basic specs are expected on every feature across the board (see Nokia C2 Tennen). The battery is no exempt. The Huawei Y5 comes with a 3020 mAh non-removable battery, which, putting the other specifications into consideration, is pretty competent. It can last you the whole day with the average performance but not much else after that. It’s no surprise we get MicroUSB so expect standard 10W charging times of about 3 hours.

Having come out a little earlier before the US ban hit Huawei and had them kicked out of core Android GMS, the Huawei Y5 comes with the usual Android 9 Pie-based EMUI 9.1, which runs the regular android available in most other phones. Irrespective, future updates and support is not guaranteed and remains unknown. We don’t expect fast animations but it gets the work done. Basic use should see no fuss but it would be a little preposterous to expect good graphic performance. Overall, you get what you get.

The Huawei Y5, despite being a very basic entry-level unit has a very aesthetically pleasing design, with a wider screen viewing space and a nice plastic finish. Over and above the basic components, it is a great value proposition and may appeal to most who aren’t targeted by other major brands. You may also want to see Infinix Smart 2.