This phone, Huawei Mate 40 Pro was announced in 2020, October 22. This phone has a 162.9 x 75.5 x 9.1 mm dimension and weighs about 212 grams. It is also a Dual SIM smartphone that uses Nano-SIM and has dual stand-by. On the front is a hole punch wherein the dual selfie camera lies. Its back panel has a triple-camera module at the center (circular module). As for the fingerprint scanner, there is an under-display, optical reader.

Huawei Mate 40 Pro comes in colors Mystic Silver, White, Black, Green, and Yellow. It makes use of the USB Type-C 3.1, USB On-The-Go, but has no 3.5 mm jack. The phone also has Bluetooth version 5.2, A2DP, LE, and GPS with A-GPS, GLONASS, BDS, GALILEO, QZSS, NavIC. It also supports Wi-Fi 802.11 a/b/g/n/ac/6, dual-band, Wi-Fi Direct, hotspot. As for radio (FM), it doesn’t come with it. It does come with an Infrared port and NFC though. Visit this product’s official website by following this link.

The Huawei Mate 40 Pro smartphone supports four network technologies. These are GSM, HSPA, LTE, and 5G. HSPA extends and improves the performance of existing 3G mobile telecommunication networks using the WCDMA protocols. LTE  is a standard for wireless broadband communication for mobile devices and data terminals, based on the GSM/EDGE and UMTS/HSPA technologies. 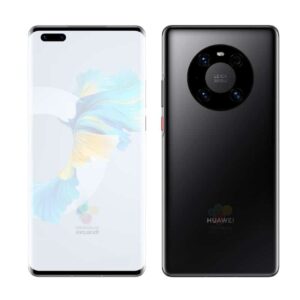 Global System for Mobile Communications is a standard developed by the European Telecommunications Standards Institute to describe the protocols for second-generation digital cellular networks used by mobile devices such as mobile phones and tablets. And 5G is the fifth generation technology standard for cellular networks, which cellular phone companies began deploying worldwide in 2019 – see Huawei Mate 30

Now, let us take a look at the display this phone has to offer. Everyone loves a good display on a phone for obvious reasons. Namely, the display is the one part of a phone you will ever interact with. Huawei Mate 40 Pro has an extremely brilliant display panel that measures 6.76 inches, 115.7 cm2. It is an OLED capacitive touchscreen that supports 16M colors and multi-touch.

This display has a decent 1344 x 2772 pixels resolution and an equally fair 456 PPI density. As for the hole punch you see on the top right corner, this is where selfie cameras are hidden. This phone’s build is glass with a glass front, glass back, and aluminum frame. Huawei Mate 40 Pro’s display also brings ~456 PPI density with HDR10 and a 90Hz refresh rate.

Under the hood, it also brings a Mali-G78 MP24 GPU. The ARM’s newest Mali-G78 GPU has been tested alongside the Kirin 9000 on a Huawei Mate 40, and the results look alarming. Although the GPU manages to hit 1 TFLOPS under peak load, the accompanying power consumption can go as high as 14W. Its average power usage seems to be around 9W – source. Huawei Mate 40 Pro comes with 256 / 512 GB of UFS 3.1 internal storage both with 8GB of RAM. You can still expand its storage using a microSDXC (uses shared SIM slot).

The Huawei Mate 40 Pro has a Li-Po 4400 mAh, non-removable battery. This is a decent battery capacity with fast charging 66W, fast wireless charging 50W, and reverse wireless charging 5W. It should be enough to last a whole day of mixed usage – see also Mate 30 Pro

Be the first to review “Huawei Mate 40 Pro” Cancel reply