Samsung Galaxy Tab A7 in Kenya

The Samsung Galaxy Tab A7 price in Kenya is 27,300 shillings. It was announced in 2020, September 02, and comes after the Galaxy M51. Samsung Galaxy Tab A7 Android tablet runs on the Qualcomm SM6115 Snapdragon 662 (11 nm) processor with an Adreno 610 GPU. The phone has 3 GB RAM and 32GB of internal storage which is expandable using micro SDXC (dedicated slot). It also runs on Android 10 and is powered by a 7,040 mAh, non-removable battery.

Samsung Galaxy Tab A7 price in Kenya and key features

Samsung Galaxy Tab A7 comes in colors Dark Gray, Silver, and Gold. It makes use of the 2.0, Type-C 1.0 reversible connector, and has a 3.5 mm jack. The phone also has Bluetooth version 5.0, A2DP, LE, and GPS with A-GPS, GLONASS, GALILEO, BDS. It also supports Wi-Fi 802.11 a/b/g/n/ac, dual-band, Wi-Fi Direct, hotspot. As for radio (FM), it does not come with it. Visit this product’s official website by following this link.

This tablet, Samsung Galaxy Tab A7 was released in 2020, September 02. This phone has a 247.6 x 157.4 x 7 mm dimension and weighs about 476 grams. It is also a Nano-SIM tablet that uses Nano-SIM and has dual stand-by. On the front is a bezel display wherein the selfie camera lie. Its back panel has a single-camera module on the right-hand side. As for the fingerprint scanner, there is none.

The Samsung Galaxy Tab A7 tablet supports four network technologies. These are GSM, HSPA, and LTE. HSPA extends and improves the performance of existing 3G mobile telecommunication networks using the WCDMA protocols. LTE  is a standard for wireless broadband communication for mobile devices and data terminals, based on the GSM/EDGE and UMTS/HSPA technologies. 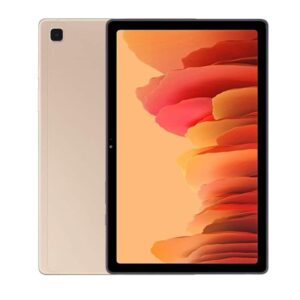 Global System for Mobile Communications is a standard developed by the European Telecommunications Standards Institute to describe the protocols for second-generation digital cellular networks used by mobile devices such as mobile phones and tablets – see Samsung Galaxy Tab A 7.0

Now, let us take a look at the display this tablet has to offer. Everyone loves a good display on a phone for obvious reasons. Namely, the display is the one part of a phone you will ever interact with. Samsung Galaxy Tab A7 has a fine display panel that measures 6.78 inches, 109.2 cm2. It is an IPS LCD capacitive touchscreen that supports 16M colors and multi-touch. This display has a decent 720 x 1640 pixels resolution and an equally fair 264 PPI density. As for the selfie camera, it is inside that hole punch on the top left corner. This phone’s build is plastic with a glass front, and plastic back, plastic frame.

A phone platform is the hardware/software environment for tablets, smartphones, and other portable devices. Samsung Galaxy Tab A7 runs on the Android 10 operating system. Android 10 is the tenth major release and the 17th version of the Android mobile operating system. It was released on September 3, 2019. Also powering Infinix Hot 10 is an Octa-core (4×2.0 GHz Kryo 260 Gold & 4×1.8 GHz Kryo 260 Silver) chipset. This version of Android it runs is based on One UI 2.1.

Under the hood, it also brings an Adreno 610 GPU. The Qualcomm Adreno 610 is a mobile graphics card for mid-range smartphones and tablets (mostly Android-based). It is included in the Qualcomm Snapdragon 665 SoCs and based on the Adreno 600 architecture. Galaxy Tab A7 comes with 32 GB of internal storage with either 3GB of RAM. You can still expand its storage using a dedicated micro SD slot.

There are two cameras on the Samsung Galaxy Tab A7. They are made up of a main 8 MP, AF, and a 5 MP selfie camera. Its main feature is LED flash, HDR, and panorama and it can shoot video up to [email protected] with the main camera as well as the selfie. The LED flash in a mobile phone is a constant light source for the screen.