The price of the Nokia C5 Endi in Kenya is 18,000 shillings. It was announced in 2020, May 29, alongside the Tava and Tennen Nokia smartphones. The C5 Endi Android Smartphone by Nokia runs on the Mediatek MT6762 Helio P22 (12 nm) processor with PowerVR GE8320 GPU. The phone has 4 GB RAM and 64 GB of internal storage which is expandable using micro SDXC (dedicated slot). It also runs on Android 10 and is powered by a 4,000 mAh battery.

The Nokia C5 Endi measures 171.7 x 76.7 x 8.9 mm (height x width x thickness) with a total weight of 200 grams. Coming to cameras, it has a triple 13 MP rear camera and an 8 MP front camera for selfies. This phone has a 6.52 inches, 720 x 1600 pixels IPS LCD display with a pixel density of 269 PPI. It has a micro USB 2.0 port for data syncing and charging. There is no fingerprint sensor present on the Nokia C5 Endi. It is a dual SIM smartphone with support for 4G LTE, Wi-Fi, and GPS too. Buy it today at PhonesStore Kenya.

This phone, Nokia C5 Endi was released on 2020, February 14. This phone has a 164.4 x 75 x 9 mm dimension and weighs about 190 grams. It is also a Dual SIM smartphone that uses Nano-SIM and has dual stand-by. On the front is a dewdrop display wherein the selfie camera lie. Its back panel has a single camera module on the right-hand side. As for the fingerprint scanner, there is none.

Nokia C5 Endi is available in the color Midnight Blue only. It makes use of the 2.0, Type-C 1.0 connector, and has a 3.5 mm jack. The phone also has Bluetooth version 5.0, A2DP, LE, and GPS with A-GPS, GLONASS, GALILEO, BDS. It also supports Wi-Fi 802.11 a/b/g/n/ac, dual-band, Wi-Fi Direct, hotspot. As for radio (FM/AM), it does come with it. Visit this product’s official website by following this link.

The Nokia C5 Endi smartphone supports four network technologies. These are GSM, HSPA, and LTE. HSPA extends and improves the performance of existing 3G mobile telecommunication networks using the WCDMA protocols. LTE  is a standard for wireless broadband communication for mobile devices and data terminals, based on the GSM/EDGE and UMTS/HSPA technologies. 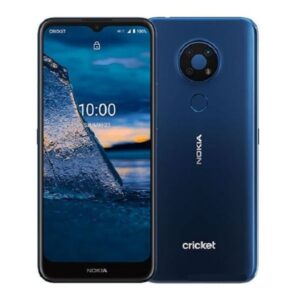 Global System for Mobile Communications is a standard developed by the European Telecommunications Standards Institute to describe the protocols for second-generation digital cellular networks used by mobile devices such as mobile phones and tablets – see Nokia 8.1

Now, let us take a look at the display this phone has to offer. Everyone loves a good display on a phone for obvious reasons. Namely, the display is the one part of a phone you will ever interact with. Nokia C5 Endi has an okay display panel that measures 6.52 inches, 102.6 cm2. It is an IPS LCD capacitive touchscreen that supports 16M colors and multi-touch. This display has a fair 720 x 1600 pixels resolution and an equally fair 269 PPI density. As for the selfie camera, it is inside a dewdrop notch. This phone’s build is plastic with the back and a plastic frame.

A phone platform is the hardware/software environment for tablets, smartphones, and other portable devices. Nokia C5 Endi runs on the Android 10 operating system. Android 10 is the tenth major release and the 17th version of the Android mobile operating system. It was released on September 3, 2019. Also powering Nokia C5 Endi is an Octa-core 2.0 GHz Cortex-A53, Mediatek MT6762 Helio P22 (12 nm) chipset.

Under the hood, it also brings a PowerVR GE8320 GPU. The PowerVR GE8320 by Imagination Technologies is an integrated graphics card for mid-range ARM SoCs. It belongs to the Series8XE series of GPUs (GE8xx0) and supports OpenGL ES 3.2, OpenCL 1.2, Android NN HAL API, and Vulkan 1.0. – source. The Nokia C5 Endi comes with 64 GB of internal storage with 4GB of RAM. You can still expand C5 Endi’s storage using a dedicated micro SD slot.

There are four cameras on Nokia C5 Endi. They are made up of a main 13 MP, (wide), PDA, 5 MP, (ultrawide), and 2 MP, (depth). Its main feature is LED flash, HDR, and panorama and it can shoot video up to [email protected] with the main camera and likewise [email protected] with the selfie. The LED flash in a mobile phone is a constant light source for the screen. This allows the phone to be used for things such as shooting low-light videos. The selfie shooter is an 8 MP, (wide) shooter.

Realme C3 has a non-removable Li-Po 4000 mAh battery. It is a lasting battery given its 4000 mAh capacity despite having a high performing Mediatek MT6762 Helio P22 chipset. It also has normal charging speeds at 10W. This battery should be enough to last a whole day of mixed usage – see also Nokia C3.

Be the first to review “Nokia C5 Endi” Cancel reply