With competition in the mobile segment intensifying, Huawei has ramped up its choices in an effort to attract the discerning user to their stable. A notable device is the Huawei Nova 5T, available from August 2019, a beast in the hardware but with one or two compromises that significantly reduce the offering price as compared to other similar devices from Huawei. That and the lingering question about where it stands with Google’s Android. So you get flagship performance but not so much its price tag.

The Huawei Nova 5T is certainly a beautiful device. It boasts a 6.26 inch IPS LCD screen with a punch-hole camera that is pushed to the top left corner, a welcome practical aesthetic as the camera is less intrusive when consuming content on the device. It also helps push the body to screen ratio to about 84.2%. The build is visibly premium, with an aluminum frame and a glass back. 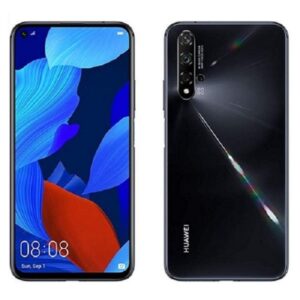 The bezels are minimal but the chin is certainly not. On the rear, we have a vertical quad-camera bump and pretty much nothing else. That’s because its fingerprint scanner is mounted on the side, doubling as a power button, a welcome design that removes the ugly rear-mounted sensor without giving us the unreliable under-display scanner. It comes with a USB-C connector but no 3.5mm jack.

The Huawei Nova 5T comes with a very powerful processor, the HiSilicon Kirin 980, threatening us with flagship performance. That’s alongside an octa-core 2.6 GHz Cortex A76/A55 CPU combo and a Mali G76 MP10 GPU. Onboard we get memory options of 6/8GB of RAM and 128GB of mass storage, but we, unfortunately, don’t have an expandable memory option.

This configuration is at the top of the mid-range segment, therefore, it handles with ease most of the intensive tasks ahead, considering the Kirin has over the years optimized their graphics processing in comparison with the chips that came before the more recent versions.

Huawei Nova 5T, like many of the more recent offerings from Huawei, really does shine when it comes to the camera department. It is a quad-camera set up, starting off with the new 48mp primary camera whose large sensor produces well-exposed photos, even in low light conditions. Onwards, it also has a 16mp ultrawide lens for those amazing landscape photos, a 2mp for bokeh and edge detection in portrait, and lastly a dedicated macro lens for those really close-up photos.

Combined, the performance is above average and pleasant. It can shoot up to 2160p video at 30 fps, with gyro electronic image stabilization, delivering Go-Pro-like stable video. The front-facing camera is a generous 32mp shooter, offering crisp, detailed, and well-exposed selfies. It can shoot 1080pvideo in 30fps, also with assistance from gyro-EIS. See Huawei Mate 20X.

Now, Huawei Nova 5T comes with a capable 3750 mAh non-removable Li-Po battery, a stepdown from 4000 mAh, but still able to easily last one through the day, majorly because they chose to go with an LCD display. But in exchange, we get 22.5W fast charging which is advertised to deliver 50% charge in 24 mins and 100% in just under an hour. We still don’t get wireless charges unfortunately but for the price, it was an expected compromise.

The Huawei Nova 5T comes with EMUI 10 based on Android 9 Pie with an update lined up for Android 10. But like many other Huawei devices available from the latter half of 2019 going forward, it no longer gets support from core android GMS after being banned by the US government. In its place, we get HMS which Huawei has striven to optimize and close the gap left by Goggle’s exit.

Instead of the Play-store, we get AppGallery where most of the major apps can be found. The rest can be side-loaded through APKs from numerous online resources. At the core though, some stock Android apps are still not compatible, like YouTube, Gmail, Docs, and other 3rd party apps like Uber that relied on Goggle’s GMS. The EMUI still is formidable, running fast and light, just like any other Android-based custom skin.

On the surface, the Huawei Nova 5T runs like a charm. For the regular Huawei user, even those outside China, it easy to forget the woes that have rocked their boat. For a new user, it’s important to note the superior hardware offerings that this device offers at its price point, in comparison to the competition. Conclusively, it is a great device, one worth trying out.