This phone, the Tecno Camon 16 Pro was released in 2020, September. This phone has a 170.9 x 77.2 x 9.2 mm dimension and weighs about 207 grams. It is also a Dual SIM smartphone that uses Nano-SIM and has dual stand-by. On the front is a hole punch display wherein the selfie camera lies. Its back panel has a quad-camera module on the right-hand side. As for the fingerprint scanner, there is rear-mounted just beside the camera module.

Tecno Camon 16 Pro comes in the colors Ice Onyx Black, and Ice Crystal Blue. It makes use of the USB Type-C 2.0, USB On-The-Go, and has a 3.5 mm jack. The phone also has Bluetooth version 5.0, A2DP, LE, and GPS with A-GPS. It also supports Wi-Fi 802.11 b/g/n/ac, dual-band, Wi-Fi Direct, hotspot. As for radio (FM/AM). Visit this product’s official website by following the highlighted link.

The Tecno Camon 16 Pro smartphone supports four network technologies. These are GSM, HSPA, and LTE. HSPA extends and improves the performance of existing 3G mobile telecommunication networks using the WCDMA protocols. LTE  is a standard for wireless broadband communication for mobile devices and data terminals, based on the GSM/EDGE and UMTS/HSPA technologies. 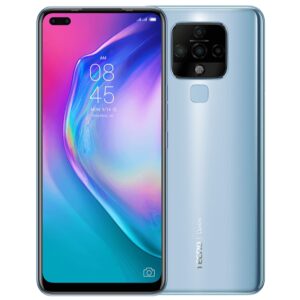 Global System for Mobile Communications is a standard developed by the European Telecommunications Standards Institute to describe the protocols for second-generation digital cellular networks used by mobile devices such as mobile phones and tablets – see Camon 16S smartphone.

A phone platform is the hardware/software environment for tablets, smartphones, and other portable devices. Tecno Camon 16 Pro runs on the Android 10 operating system. Android 10 is the tenth major release and the 17th version of the Android mobile operating system. Also powering the Camon 16 Pro is an Octa-core (2×2.0 GHz Cortex-A75 & 6×1.7 GHz Cortex-A55), MediaTek Helio G70 (12 nm) chipset. This version of Android it runs is based on HIOS 7.0.

Under the hood, it also brings a Mali-G52 2EEMC2 GPU. The ARM Mali-G52 MP6 is an integrated mid-range graphics card for ARM-based SoCs (mostly Android-based). It was introduced in mid-2019 in the HiSilicon Kirin 810 and uses 6 clusters (hence the MP6 name).  Tecno Camon 16 Pro comes with 128 GB of internal storage with 6 GB of RAM.

Tecno Camon 16 Pro has a respectable Li-Po 5000 mAh, non-removable battery. It is a lasting battery given its 5,000 mAh capacity – see also Camon 15 Pro smartphone. This phone supports a fast battery charging 18W. You need to use at least an 18W adapter with a USB-C-to-Lightning cable.