The Apple iPhone 12 Pro measures 146.7 x 71.5 x 7.4 mm (height x width x thickness) with a total weight of 189 grams. Coming to cameras, it has a dual 12 MP rear camera and a dual 12 MP front camera for selfies. This phone has a 6.1 inches, 1170 x 2532 pixels IPS display with a pixel density of 460 PPI. It also comes with a Lightning, USB 2.0 port for data syncing and charging. There is no fingerprint sensor present on the iPhone 12 Pro but Face ID is present. It is a dual SIM smartphone with support for 5G, Wi-Fi, NFC, and GPS too. Buy it today at Phones Store Kenya.

This phone, Apple iPhone 12 Pro was released in 2020, October 13. This phone has a 146.7 x 71.5 x 7.4 mm dimension and weighs about 189 grams. It is also a Dual SIM smartphone that uses Nano-SIM and has dual stand-by. On the front is a notch display wherein the selfie camera and sensors lie. Its back panel has a dual-camera module on the right-hand side. As for the fingerprint scanner, its place has been filled with Face ID which lets you securely unlock your iPhone or iPad, authenticate purchases, sign in to apps, and more.

Apple iPhone 12 Pro comes in colors Silver, Graphite, Gold, and Pacific Blue. It makes use of the Lightning, USB 2.0 reversible connector, but has no 3.5 mm jack. The phone also has Bluetooth version 5.0, A2DP, LE, and GPS with A-GPS, GLONASS, GALILEO, QZSS, and NFC. It also supports Wi-Fi 802.11 a/b/g/n/ac/6, dual-band, hotspot. As for radio (FM), it does not come with it. Visit this product’s official website by following this link.

The Apple iPhone 12 Pro smartphone supports four network technologies. These are GSM, HSPA, LTE, and 5G. HSPA extends and improves the performance of existing 3G mobile telecommunication networks using the WCDMA protocols. LTE  is a standard for wireless broadband communication for mobile devices and data terminals, based on the GSM/EDGE and UMTS/HSPA technologies. 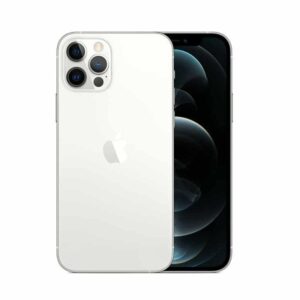 Global System for Mobile Communications is a standard developed by the European Telecommunications Standards Institute to describe the protocols for second-generation digital cellular networks used by mobile devices such as mobile phones and tablets. And 5G is the fifth generation technology standard for cellular networks, which cellular phone companies began deploying worldwide in 2019 – see iPhone 12

Now, let us take a look at the display this phone has to offer. Everyone loves a good display on a phone for obvious reasons. Namely, the display is the one part of a phone you will ever interact with. Apple iPhone 12 Pro has an impressive OLED display panel that measures 6.1 inches, 90.2 cm2. It is a Super Retina XDR OLED capacitive touchscreen that has 1200 nits (peak) brightness.

This display has a decent 1170 x 2532 pixels resolution and an equally high 460 PPI density. As for the selfie camera, it is inside that notch on the top center. This phone’s build is glass with a Glass front (Gorilla Glass), glass back (Gorilla Glass), and an aluminum frame. iPhone 12 Pro’s display is also graced with HDR10, 800 nits (typ), Scratch-resistant glass, oleophobic coating, Dolby Vision, Wide color gamut, and True-tone.

A phone platform is the hardware/software environment for tablets, smartphones, and other portable devices. Apple iPhone 12 Pro runs on the iOS 14.1 operating system. iOS is a mobile operating system created and developed by Apple Inc. exclusively for its hardware. It is the operating system that powers many of the company’s mobile devices, including the iPhone and iPod Touch. Also powering Apple iPhone 12 Pro is an Octa-core (2×2.05 GHz Cortex-A76 & 6×2.0 GHz Cortex-A55), Mediatek MT6785 Helio G90T chipset.

Under the hood, it also brings an Apple GPU (4-core graphics) GPU. The Apple 12 Pro Bionic graphics card is the second generation of integrated GPUs that was designed by Apple and not licensed by PowerVR. – source. Apple iPhone 12 comes with 128 / 265 / 512GB of internal storage all with 6GB RAM. You can not expand its storage using a dedicated micro SD slot.

Apple iPhone 12 Pro has a Li-Ion, non-removable battery. Despite having a high performing Apple A14 Bionic (5 nm) chipset, this battery lasts quite for at least a whole day of usage. You will also be charging at 20W, 50% in 30 min (advertised) – see also iPhone 12 Pro Max