The retail price for Xiaomi Mi Note 10 in Kenya is around 47,500 shillings. Debuting in November 2019, the phone is quite literally, bonkers. It’s a very conspicuous phone, largely because of its camera set up. It has not one or two, but five cameras at the back, once again setting the bar, not only for the number of cameras but also for the fact that its primary shooter is an overwhelming 108mp lens. Let’s take an in-depth look.

The Xiaomi MI Note 10 comes with the 6.47inch super AMOLED, clocking at an impressive 87.8% body to screen ratio, and a teardrop notch to house the camera and the earpiece. The screen has a waterfall design, meaning the screen curves over the edge, more like the Samsung edge phones of the yesteryears. The screen is mesmerizing and immersive, giving a great viewing experience. To top it off, the on-screen optical fingerprint scanner is fast and snappy. 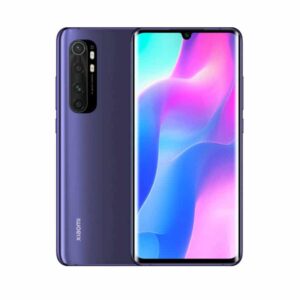 It has Corning Gorilla Glass protection for both front and back, sandwiching an aluminum frame, with its brightness maxing out at 600 nits, making it extremely viewer-friendly, even in direct sunlight. It’s also HDR 10 ready and the back has a glossy feel, with the 5 cameras aligned in one vertical line onto one side of the top left corner and some lettering on the bottom left corner. It is 9.7mm thick, owing to the big battery, and weighs about 208g. it gladly has a 3.5mm earphone jack and a USB-C charging port

The Xiaomi MI Note 10 comes with the new and snappy Snapdragon 730G midrange chipset, an up to 2.2GHz Kyro 470, and an Adreno 618 GPU. Bundled with a 6/128GB, Note 10 is a beast. It easily performs like a high-end flagship, snappy on network speed, gaming, app multitasking, and all manner of RAM intensive operations. It however does not have a memory card slot for ROM expansion. Paired with the 108mp camera, the SD730G is a great mid-range option.

Now to the crown of it all, the Xiaomi MI Note 10 houses a great deal number of camera shooters, five of them to be exact. The massive primary sensor is 108mp, rivaling most of the flagships including Huawei’s P30, Apple’s 11 pros, Samsung’s S10, or the new RealMe X2 Pro. To deliver incredible performance, its paired with two telephoto lenses, a 12mp 50mm with 2x optical zoom and a 5mp (scalable to 8mp) with 5x optical zoom, the massive 20mp 13mm ultra-wide sensor, and a 2mp macro lens.

This easily outmaneuvers many DSLR cameras out there, making this a true image powerhouse. The camera can record 4K video at 30fps, 2160p video at 30fps, while the 1080p has the 30/60/120/240fps option. As for recording 720p, it can record at a ridiculous 960fps. The forward-facing camera is equally impressive, clocking at 32mp, with the ability to shoot HD video at 30fps and HDR-ready. The photos are great, very rich in color, sharp, and very detailed. The portrait mode has great boundary detection and a believably distanced background.

The Xiaomi MI Note 10 comes with a 5230mAh, big enough even for a power user. On average, it could easily last 2 days. That’s over and above many other phones in the same category, making it stand out. On top of the big battery, Note 10 comes with 30W fast charging, achieving 58% charge in 30mins and 100% in a little over an hour. With good battery management, MIUI is famous for, the battery should deliver a great experience. The battery is advertised to have a 95h (6 days) endurance rate.

Out of the box, the Xiaomi MI Note 10 comes with an Android 9 Pie with an MIUI 11 skin slapped on top. It’s quick and responsive, handling any game or task with ease. The bloatware is not overwhelming, plus it comes with some helpful tweaks, such as a screen recorder, a virus scanner, and a gaming mode to help mute notifications during gameplay, and also record gameplay. Security and software updates shouldn’t be a problem.

In conclusion, the Xiaomi MI Note 10 is a great and beautiful phone. It comes in Aurora Green, Glacier White, and Midnight Black.it has no NFC nor wireless charging. There are no official IP ratings for dust or water resistance. It also supports dual nano-SIM and Bluetooth 5

For the latest Xiaomi phones in Kenya

Be the first to review “Xiaomi Mi Note 10” Cancel reply