The price of Samsung Galaxy Tab S7 Plus in Kenya is 95,000 shillings. It has not yet been released but was rumored alongside the Galaxy Tab S7. Samsung Galaxy Tab S7 Plus Android tablet runs on the Qualcomm SM8250 Snapdragon 865+ processor with Adreno 650 GPU. The phone has 6 GB RAM and 128/256 GB of internal storage which is expandable using micro SDXC (dedicated slot). It also runs on Android 10 and is powered by a 10090 mAh battery.

Samsung Galaxy Tab S7 Plus specs and price in Kenya

The Samsung Galaxy Tab S7 Plus measures 285 x 185 x 5.7 mm mm (height x width x thickness) with a total weight of 590 grams. Coming to cameras, it has a dual 13 MP rear camera and an 8 MP front camera for selfies. This tablet has a 12.4 inches, 1752 x 2800 pixels Super AMOLED display with a pixel density of 274 PPI. It has a USB Type-C port for data syncing and charging. There is a fingerprint sensor present on the Samsung Galaxy Tab S7 Plus. It is a dual SIM smartphone with support for 5G, LTE, NFC, Wi-Fi, and GPS too. Buy it today at PhonesStore Kenya.

This phone, Galaxy Tab S7 Plus has not yet been released but was rumored alongside the Galaxy Tab S7. This phone has 285 x 185 x 5.7 mm dimensions and weighs about 590 grams. It is also a Dual SIM smartphone that uses Nano-SIM and has dual stand-by. It was released with a design similar to the original base version. On the front is a bezel with a camera punch wherein the selfie camera lie. Its back panel has a camera module on the right-hand side. As for the fingerprint scanner, it is side-mounted.

The Samsung Galaxy Tab S7 Plus tablet supports four network technologies. These are GSM, HSPA, LTE, and 5G. HSPA extends and improves the performance of existing 3G mobile telecommunication networks using the WCDMA protocols. LTE  is a standard for wireless broadband communication for mobile devices and data terminals, based on the GSM/EDGE and UMTS/HSPA technologies. You may also like OnePlus Nord 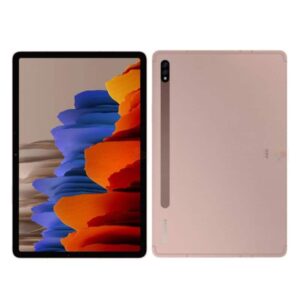 Global System for Mobile Communications is a standard developed by the European Telecommunications Standards Institute to describe the protocols for second-generation digital cellular networks used by mobile devices such as mobile phones and tablets. And 5G is the fifth generation technology standard for cellular networks, which cellular phone companies began deploying worldwide in 2019 – see Galaxy Note 10 Lite

Now, let us take a look at the display this tablet has to offer. We all love a good display on a tablet for obvious reasons. Namely, the display is the one part of a phone you will ever interact with. Samsung Galaxy Tab S7 Plus has a fine display panel that measures 12.4 inches,  446.1 cm2. It is a Super AMOLED capacitive touchscreen that supports 16M colors and multi-touch. This display has a high 1752 x 2800 pixels resolution and an equally high 266 PPI density. A high 120Hz refresh rate (and HDR10+) is also present here. A refresh rate is the number of times your monitor updates with new images each second. You get 83.6% screen-to-body ratio from this display.

A phone platform is the hardware/software environment for tablets, smartphones, and other portable devices. Samsung Galaxy Tab S7 Plus runs on the Android 10 operating system. On top Android 10 is One UI 2. One UI 2 is a software overlay developed by Samsung Electronics for its Android devices running Android Pie and higher. Succeeding Samsung Experience UX and TouchWiz, it is designed to make using larger smartphones easier and become more visually appealing. These two work hand in hand to bring you the most intelligent system experience, featuring a fresh interface, from the home page to app icons, font sizes to background colors.

Samsung Galaxy Tab S7 Plus has a large non-removable Li-Po 10090 mAh battery. It is a lasting battery given its 10090 mAh capacity. It also has fast charging 45W. This battery should be enough to last a whole day of mixed usage – see also Galaxy Note10 Plus. Usually tablets have at most 8,000 mAh battery capacities. But now the S7 Plus has re-written the rules with an even larger battery.